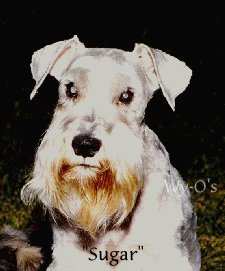 . . . Please notice the icy blue color in her eyes where you would expect a dark pupil to be - that's the hereditary congenital cataract.
. . . I wish this information wasn't needed anymore - but several times since coming on the internet, people have asked about their Schnauzer with cataracts and whether they should consider cataract surgery. Cataracts can have a number of different causes, including disease or heredity.
. . . Years ago, the Miniature Schnauzer fancy became very involved in trying to eradicate the hereditary congenital cataracts. These cataracts were found to be caused by a simple autosomal recessive gene - - 1.) both parents must carry the gene for a puppy to be affected. 2.) the cataracts are visible at birth to a veterinary ophthalmologist using a slit lamp, and may become "mature" - solid, full blown - by one to three years of age. 3.) the cataracts occur in BOTH eyes.
. . . Because the congenital cataract was found to be a simple autosomal recessive gene and could be identified so early in life, the Miniature Schnauzer people organized a way to identify carriers of the gene through test breedings. This way, the dogs who carried the problem could be removed from any thoughtful breeding program. We test bred our dogs, as did many, many other Miniature Schnauzer people, for these congenital (present at birth) cataracts.
. . . This involved first having each of our dogs examined by a Board Certified Veterinary Ophthalmologist to make sure our Schnauzers had normal eyes and vision. Guess what - there weren't any of these specialists in Idaho! So we drove 10 hours just to find such a doctor. Then that dog was bred to another Miniature Schnauzer who had already been diagnosed with the hereditary congenital cataracts. At 8 weeks, all the resulting puppies were examined with a slit lamp by the Veterinary Ophthalmologist - 10 hours thataway, and then back home. Then, if all puppies were clear of cataracts, and depending on how many puppies were in the litter, the parent was rated a statistical probability of being clear of the cataract gene.
. . . By the way - since our puppies passed the tests and had normal eyes, each one became beloved pets. If you understand the genetics, you know that each test puppy carried the cataract gene, so HAD to be spayed or neutered so they wouldn't pass it on. But their eyes, their personalities, and their lives were perfectly normal.
. . . We encountered no problems breeding our two girls to a blind male. But the people who owned a blind female didn't want to keep her anymore, so we had to buy her to do the test breeding for our male. I was really concerned about taking a poor, blind, handicapped dog into my household. **I couldn't have been more wrong!!** Sugar was one of those dogs with a great personality, a wonderful confidence, and she easily developed a "mind map" of our house and yard. Even though she had fully developed cataracts by the time she was a year old, the veterinary ophthalmologist explained she still had some light and dark sensitivity that she used very well. She also used her awareness of the other dogs - jingling dog tags are a nice clue. But if we met an obstacle in a strange place, we would just say "Careful, Sugar" - she would slow down for a moment, check it out, then take off at a trot again. We have a dozen "Sugar" stories, all about her abilities - none of handicap.
. . . Great dog, great personality, and her puppies were wonderful pets as well. (remember, a dog's personality is hereditary too!!) And just for the record because the flash of the camera washed out the photo, Sugar's color is very light salt and pepper, commonly referred to as "silver" .
. . . We investigated cataract surgery. As I remember, the doctor said the surgery was more difficult than in humans because the dogs' eye is smaller, that vision would not become "normal", and surgery would be expensive. We made our decision then, and still believe now, that since she did so well as she was, the trauma of surgery with such limited results and the expense were not worth it. Nobody had ever told Sugar that she was blind!!!
. . . I don't mean to make light of a very serious problem. Every dog that goes blind for whatever reason is a terrible heartbreak - and worse that this particular cataract can be avoided if only more people had known more and cared enough before the puppy was ever conceived.
. . . My point in writing this page is simply to answer the question I've been asked - "should I have my dog's cataracts surgically removed?" (Unless your veterinary ophthalmologist recommends differently for some medical reason) -- otherwise -- in my opinion, and in a word, "No".
Wyoma

**I've heard of a book called "Living With Blind Dogs", by Caroline Levin, RN. I haven't read it myself, but have heard good reviews. You might look at Amazon.com.
Check out the Blind Dog website, http://www.blinddogs.com/ that has a lot of information.

©Copyright 1998, 1999, 2013 Wyoma Clouss: All rights reserved for photos, background, and written material. You may not copy or reuse any material on these pages without my express written permission.